Coffee has created its own "culture" in Turkey are the famous words of the great Turkish 20th century poet, Yahya Kemal. A little bit more than a casual visit to Turkey would convince anyone that this is the case. Coffee for Turks is not simply a drink, but has its own history, its institutions (coffeehouses), its rituals, its own rules of when and how to drink it, and even a tradition of fortune-telling by reading the coffee grinds deposited at the bottom of a traditional Turkish coffee cup. Most Turks would find it superfluous to call it Turkish coffee: coffee is Turkish coffee. 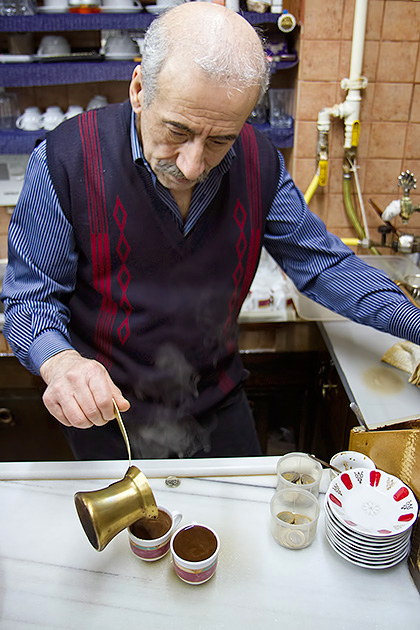 Shortly after coffee was introduced to the Ottomans in 1543, it became so popular so quickly that coffeehouses were opened and small shops opened specializing in roasting coffee. Coffee roasting is called "tahmis" and to this day there is a street called Tahmis in the Eminonu neighborhood in Istanbul where the so-called Egyptian spice bazaar is located. Its name derived from the coffee shops located on this street 460 years ago.

Let's go back to what the poet said: What would a "culture" created by coffee mean ("kahve medeniyeti" in Turkish, which is hard to translate since the expression denotes something that extends beyond the more restrictive term "culture")? Is there such thing as "culture" when it comes to coffee? We cannot answer this question directly without going into the whole experience of coffee. We will therefore approach it from various angles. First its ritualistic element:

Why would coffee be associated with rituals or ceremonies? In its first aspect, this refers to the special way of making Turkish coffee. The etiquette that has developed around coffee-making, even though it has changed somewhat from former times, constitutes a set of rules coffee lovers still try to adhere (many times in spirit if not to the letter. See section How to make Turkish Coffee? for more information.

A second aspect of the ritualistic element in Turkish coffee refers to certain traditional elements that have been woven into it. One strong tradition dictates the typical (and also, to some extent, stereotypical) situation where the family of a young man visits the family of the bride-to-be to ask for their permission for their marriage. The girl whose hand is sought is supposed to bring coffee on a coffee tray, and traditionally this is the only time she has a say in the whole affair. The vote she casts is expressed in terms of how sweet the makes the coffee, ranging from extra sweet (a definite yes) to "no sugar" (a definite no), and at times to salty coffee, a step shorter than not appearing at all.

This tradition notwithstanding, to sweeten coffee with sugar is a relatively new usage ("new" considering a tradition of about four and a half centuries.). Turks used to drink their coffee without any sugar. Instead, it was customary to eat or drink something sweet either before or after the coffee, sweetened fruit juices known as sherbet, fruit preserves, Turkish delight, sultan’s paste, halva, or other confectionery.